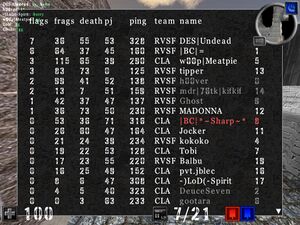 In the Capture the Flag gamemode two teams fight against each other with the goal of capturing the opposite team's flag as many times as possible until the match time limit runs out. There are no rounds or weapon restrictions in the Capture the Flag gamemode, and players respawn five seconds after they die. Each team has a flag which is usually, but not always, near the team spawn points. The flags in the Capture the Flag gamemode are either blue, for RVSF, or red, for the CLA. A player can only pick up the opposing team's flag, and a goal is scored when a player brings the opposing team's flag to his own flag. If both teams steal each other's flags at the same time then neither team can score until a flag is returned. A flag can only be returned if the opposing player carrying the flag is killed and the flag is touched. If an opposing player carrying the flag is killed but the flag the player was carrying is not touched, then the flag will remain in the spot where the player was killed until it is: returned, picked up by a player on an opposing team, or reset by the server. The team with the most flags captured wins the match. In the event of a tie in the number of flags captured, the number of kills is used to determine which team wins. If both teams have a tie in the number of flags scored and the number of kills, then the team with the least amount of deaths wins.

Camping is usually not frowned upon in this gamemode, since the object of this gamemode is not to get as many kills as possible, but to capture as many flags as possible. It is recommended that some players stay near the flag to prevent players on the opposing team from easily stealing the flag.

Many players guard the flag by standing right next to it, or very close to it, but since there is a five second delay in the respawn time, it might be useful to pick a spot that is a little farther away from the flag so that even if a player is killed the player can respawn in enough time to prevent an opposing player from stealing the flag.

Grenades can be very useful in killing players on the opposing team who are guarding their flag, but players must be careful not to kill their own team members, especially if they are carrying the enemy flag.

This gamemode can only be played on maps with flag bases.

Wikipedia has an article about: Capture the Flag