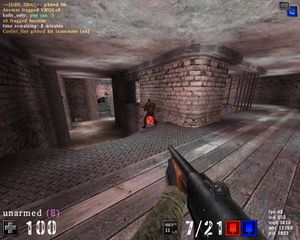 Unarmed (6) camps with a sniper in ac_depot

A camper is a term for players that stay in one spot of the map for long periods of time. Usually in a hidden area of some sort so they can kill without being killed themselves.

There is always a rift between players and camping. Such as:

Many server admins do kick and/or ban people for camping, as they believe it stops the fast paced style of AssaultCube, and if this happens, it best to just move to a different server.

Wikipedia has an article about: camper
Retrieved from "https://wiki.cubers.net/index.php?title=Camper&oldid=2314"
Categories: