A clan is a relative term, though usually it defines a group of players who regularly play together on AssaultCube.

There are many clans in AssaultCube; they vary from a few friends to well organized groups with a broad range of structures, goals and members. The lifespan of a clan also varies considerably, from a few hours to several years; as does the amount of people in a clan.

Because the game itself is very unorganized in team action the players tend to take on the organization themselves. This has led to a vast number of different styles of clans.

Competition between clans is common but also takes many forms. Some clans have been known to be content with playing against each other on public servers, while others organize matches with other clans. Tournaments and ladders have been made specifically for clans to compete in.

Many clans have their own private servers to play their map/mode of choice on. These are most handy for holding [practice] matches against other clans, for matches involving many clans, or simply to practice within their own group. Private servers are also convenient since they do not have problems that plague public servers, such as team killers or console spamming. 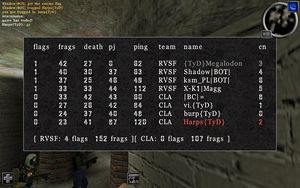 Players show that they are a member of a clan by using a unique tag (= clantag) which takes the form of a prefix or suffix "tag". Some clans allow their members to use it at any position of their players name.

Tags are often enclosed in brackets or symbols. For example, in a name like "=DOE=John", "=DOE=" is the clantag and "John" is the player's name. A clan's tag is typically another variation of keyboard or character map alphanumerical combinations, however.

If a player who is not actually member of a clan uses a known clantag, most clans will put that player on a blacklist. A result of this is that the said player will now be banned/abused etc. by most members of that clan. The effectiveness of using a blacklist is disputed, however, due to how easily players can be impersonated by cheaters and other problematic players. Banning players based on their name could result in innocent players being banned due to impersonators attempting to ruin their reputation. However, most active 'blacklisters' check IP's as a routine, so as to avoid this.

There are often two ways to become a member of clan: by recruitment and by invitation.

This is the more common way - the clan informs the whole community, that they are willing to let some new members in. Whether they are recruiting or not will often be announced on:

Some clans do not have any requirements for joining. In that case the joining process is fulfilled with adding the clan tag to the player's nickname; this, however, is normally frowned upon by peer clans. More selective clans are asking the potential candidate for putting screenshots and demo files on their clan website. It's also usual to do some test games with the candidate. After passing the tests - e.g. beating a clan member in three matches - they have joined the group or are eligible for voting.

Other clans have a special perception about the player who should join the clan. If they found someone in the community who fits in that pattern they may invite him for joining. An example for an "Invitation only"-clan is Tear you Down!: The clan invite a player to become trial status and after a sincere exchange of thoughts they do a vote to let him in or not.

Wikipedia has an article about: Clan
Retrieved from "https://wiki.cubers.net/index.php?title=Clan&oldid=3720"
Categories: