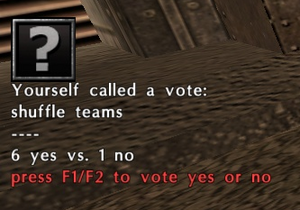 The AC voting system was introduced with version 1.0 to supercede the old system of having a master who controlled server commands. The old system was open to abuse, as a master could not be over-ruled, except by an admin. Depending on the server setup, a vote for a server command can be called by any player and the other players in the server are asked to vote F1 (yes) or F2 (no) in response. It is not compulsory to vote. You cannot call another vote if a vote is running.

A vote is passed immediately if more than half of the current players (or the current admin) votes 'yes'. A vote fails immediately if half the players (or the current admin) votes 'no'. A vote fails after 30 seconds neither immediate outcome was reached. This last point is the subject of some controversy, as a vote will fail if, in a twenty player game, there are ten 'yes' votes and no 'no' votes. The vote is weighted some by the servers evaluation of if it is a good vote or not. Example, if a kick vote comes up on someone with a very high ratio, the server might perceive this player as cheating, and weight the vote to help kick him. Another thing the server might look at is if the player is possibly spamming.

Common server commands that can be voted

Commands available to all players in a default server setup

Commands available to admins only in a default server setup

Commands available to admins only in any server (and, therefore, not a true vote)