From AssaultWiki
(Redirected from Hacker)
Jump to: navigation, search

A cheater is someone who modifies the game in a way that alters, disrupts, or prevents normal gameplay, usually with the intent of giving himself or herself an advantage over other players. Someone who uses bugs, glitches, or exploits to their advantage are called exploiters or glitchers, although these are still considered by some players to be a form of cheating. 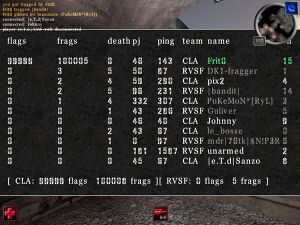 Score modification was possible prior to version 1.0.

The other way, memory modification, is accomplished by using an external tool to alter values in the computer's memory. Using such tools, the cheater is able to find out the memory position of some in-game variables (such as the amount of gun recoil) and is able to manipulate them.

The following are examples of cheats you may encounter in AssaultCube:

The cheater has modified the map in some way. The cheater may be appear to walk through walls or be able to rapidly score in CTF.

Similar to the above, the cheater may be able to pass through walls, but in this case he or she will float or fly through them.

In some game modes - like OSOK - the player character is limited in his weapons selection (here: sniper rifle and knife). So if there is someone suddenly using grenades then he has manipulated the weapons available for him to use.

The cheater's movement speed is increased or decreased by some amount.

Lagging players on the scoreboard

New players might be confronted with some game (side) effects which look similar like a cheat. It's necessary to learn the difference to prevent a false accusation.

This could be due to a player being on the incorrect map. Despite the addition of automatic custom map downloading, this sometimes still happens due to an incorrectly configured server.

The player has a connection problem or lags so the game data is not distributed to all clients and back at the same time.

The reason for this is identical to the warping problem discussed above.

Effects on the community

When playing an online multiplayer game, one enters into an unwritten contract; one based entirely on trust. A player has a fair assumption that all other existing players, and any new players, will be operating under the same in-game freedoms and restrictions which are applied to them. Some of these freedoms and restrictions may be immediately obvious, and some may be discovered only through community interaction and/or gaining experience through playing. When a player makes the choice to cheat, and gain abilities not available to others, the initial assumed trust is removed, permanently.

Due to the easy nature of cheating in AssaultCube, the AssaultCube v1.0 release incorporated logging and blacklist functionalities into the server code, which can then be activated by using one of the blacklists available from the largest clans (such as Tear you Down! and Beyond Compare). There is also a blacklist thread in the official forum in which people can inform the community about a cheating player and request to ban him.

However, some cheaters will naturally have dynamic IP addresses which makes the ban of single IP addresses ineffective. For this reason of repeated offenses, some clans have begun to block whole IP address ranges and ISPs, unfortunately accepting the fact that some innocent players are also banned. Such decisions are sometimes misunderstood as a discriminatory or hostile act (see Brazilian ban incident).

Other effects are that some clans (or single members) accuse other clans of cheating on the forum.

Wikipedia has an article about: Clan
Retrieved from "https://wiki.cubers.net/index.php?title=Cheater&oldid=7923"
Categories: