From AssaultWiki
(Redirected from Lag)
Jump to: navigation, search

The difference between ping and PJ 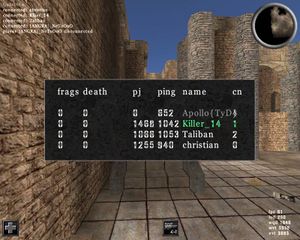 Horrible PJ and ping values on the scoreboard

However, ping does not matter too much in AssaultCube. You can play a fine game against someone pinging 800 or even more, but the game will begin to feel weird. It can be possible for the other player to kill you after you kill him, because in his time he fragged you first. Getting killed by a dead player does not mean that they are cheating; it just means that the internet connection is a little laggy. 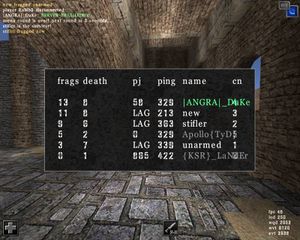 Lagging players on the scoreboard

PJ is the amount of milliseconds that have passed since you have received updates from a player.

A high (for example: 950) or variable (for example: The PJ is at 40 then jumps to 1000 and then 300 then 550) packet jump is bad for game play, because these players may become difficult targets and "warp" around the map (warp means they disappear/reappear out of nowhere). The more unstable it is, the more a player will warp around. Some people might be warping on purpose too.

You cannot see your own packet jump. If someone's packet jump is bad enough, their PJ number will turn into the word LAG and they will stand still and start saluting because they are lagging too badly.

Please don't immediately kick someone because they have a high ping. Instead, mention the problem to them and possible solutions (turning off torrents or other downloads). Many players do not know that they have a problem and will wonder why they were kicked. Also there still some unlucky people who still have a dial-up internet connection. For these people, the Cube games are really the only FPS they can play against lpb´s properly. Unless they have a high packet jump, or a consistently unplayable (1000+) ping, please do not kick them.

Wikipedia has an article about: Lag

Wikipedia has an article about: Ping
Retrieved from "https://wiki.cubers.net/index.php?title=Ping_and_PJ&oldid=3478"
Category: