The ACWC is taking place once a year, until now always during the months july to september. This is the most recognized competition in the AC scene. Each country is represented by a team of 3 players (not including subs) and fight against other countries. Since there have been different hosters, there are different rules. The winners of this Cup receive an award. Apart that there further awards for the best single players in different categories like the "Best Fragger". Since 2011 most games have been live-streamed. 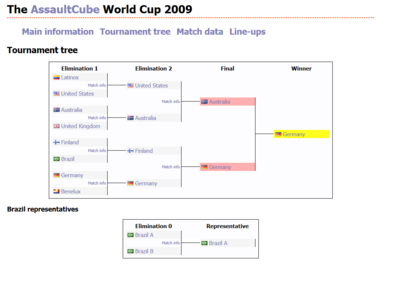 The 2013 Assault Cube World Cup was an event organized by competitive Assault Cube players Harrek and Vanquish with major help from dev and well-respected community member [email protected] It was the second World Cup to feature use of an anti-cheat client, which has famously become the most popular Assault Cube anticheat client to date, still being used by many different competitive players due to features such as customizable scoreboard, country flags and a client-side hitfix. Most of the matches were also streamed by X-Ray_Dog, 0xygen and Waffles, and an interactive scoreboard with embedded stream was created by [email protected] - and it proved to be incredibly popular.

The bracket is available at http://challonge.com/2013acwc . You can view the corresponding screenshots for each game by clicking the appropriate letter next to each match.

2015's event organisation is spearheaded by community member Mousikos, with help from f0r3v3r, Vanquish, HoeHunter and Marti. It does not feature the use of an anticheat client, however instead features very strict protocols for checking for the possibility of cheats. This ACWC has some of the best coverage of any event in AssaultCube, with Vanquish streaming[1] with English casters, and PiToN streaming [2] in Portuguese.

Sixteen teams are currently signed up to the 2015 World Cup, and the matches are due to start on the 4th July.

The bracket can be viewed at http://bracketcloud.com/tournament/32374.